“I hadn’t been on any actual tours and worked my way up, I did everything a little bit onthe spot. Things have always arrived without me looking for them. I grew up among musicians and actors in an underground dimension without ever having certain opportunities, children of a world where ambition is linked to working on fairground rides and not in music itself. A world of self-taught musicians who remain just that. Very few have emerged and I am one of the exceptions.” She’s also a tattoo artist by profession. The first tattoo you see on her arm is “about the disease I had”, a woman’s face that cuts death’s head off with a scythe, the second is “a little gypsy woman I’d be with the “calci in culo”  from the fairground tattooed on her chest. But I still have to do the tattoo of the symbol of the Sinti, the wheel, I’d really like to do it, I’m thinking about it.”

At what age did you start tattooing?

“I’ve been tattooing since the age of 21, I got

passionate about it at art high school. At first, I drew

them myself, then for friends at home in Thiene. Then I

bar. Then I worked in  shops: first in Malo, in Vicenza  then at the

“Sacrum Cor” in Zanè, and in Trastevere at “The Bad

When did music arrive?

Music has always been part of my family. All self-taught,

no one has ever studied. My father plays the guitar

won the “Corrida” television show at the age of sixteen .

My uncle sings an Italian melodic repertoire. My grandmother on my

father’s side used to go to taverns to sing as a girl. My

maternal one was a pianist like her mother. They had

taken piano lessons but none of them had been to the

conservatory. This self-taught thing stuck with me, I also

Where did you grow up?

In Thiene, and then as nomadic,  living in a caravan, as we

went around all the town fairs and festivals with our

shooting gallery sideshow in the middle of a world

of swing carousels and tagadas.

My family is special: my father is Sinti, my mother is not, far from it;

the daughter of entrepreneurs,  she ranaway from home at the age of 25 and her family didn’tt ake it well. The first cases of mixed marriages date back to the 1950s. My father was one of the first to

get married like this in Italy. Theirs is an impossible and

Until when did you travel round with your parents?

My father had already realized that the world of rides

was in decline when I was a child. Luckily my mother

had kept her job as a clothes designing consultant.

They decided to settle in Thiene to send me to school,

which, in our world, isn’t a priority because you are your

own entrepreneur and from an early age you think

more about getting a driving license for trucks than

about a school diploma. I finished elementary and

middle school, then the art high school in Schio.

They only put on the fair in the summer. My father has always

had problems since he stopped with the rides: you

come for generations of entrepreneurs then you stop,

you are no longer a traveller, you find yourself doing

something else, all possible jobs, but nobody trusts

you enough to hire you because “you’re a gypsy”.

They still live in Thiene. He suffers from insomnia except

in the summer when he can sleep in his caravan.

Have you ever thought about writing a song

Yes, but I haven’t done it yet. I never hid my origins, it’s a part of me

that is very present. As a child at school and then as

a teenager, I did have some problems, a boy didn’t

want to go out with me anymore after finding out that

I belonged to the Sinti. I had a tough life, I know what

poverty is, literally not having money to eat. I’ve always

I grew up with all my Sinti relatives –

sometimes I get confused with all the different relatives

– but the world of the fairground workers is my family: it is

the life I come from,and i’m proud of it.

On the street you have to learn to survive, you do anything, you are a factotum, you help and learn from everyone, it’s another way of growing..

Also, we knew so many people, and we all grew up

together, there is a different family value.

You are not the first star in your family.

I’m the great-granddaughter of Osiride, the family

idol: he was a stuntman, acrobat, fire-eater, wrestler,

he worked in the film Ben Hur and in those swordand-

Fellini, Germi, Lattuada. He lived for years in Rome in

the Garbatella district in front of the Catacombs of

Commodilla in his two caravans, he fought to have

a house in Ostia and succeeded. Luckily, I met him

before he passed away. The owner of the depot for

the scenery for the rides of the Togni family of Sinti

origins, where we went to take the pictures for this

article, knew Osiride well and for that reason he had

given us permission to enter. It was exciting to enter this

But the family stories are not over: Renato Mastini, my

grandmother’s first husband was a partisan, he was

one of the ten martyrs of Vicenza, four of whom were

Sinti. Pregnant and very young, she managed to save

herself, and returned to her family and many tears later she remarried.

Today, a real Sinti no longer exists, over the years

everything has mixed, it is a radically changed world,

society has changed us, the decline of the traveling show is accelerating everything, this life is being abandoned.

It is a shame as it is a tradition that is part of Italy.

Now, for me, professional music is a new world. It’s really

tough! I produce myself; I already have two tracks out

on Youtube written by me, I don’t have an album yet but I hope to

release one in 2021, and that’s why I’m concentrating

on two singles. I always think that for me it can’t go

wrong because I am who I am, I do what I like and I have already

achieved many things. Officially I am a performer and

that is how I went to Sanremo, but I went on X Factor

with my own song because I want to be a songwriter.

My secret dream is to create my own audience, perform

in my concerts, make a living with music and tattoo for

pleasure. Wherever that takes me, always a nomad. 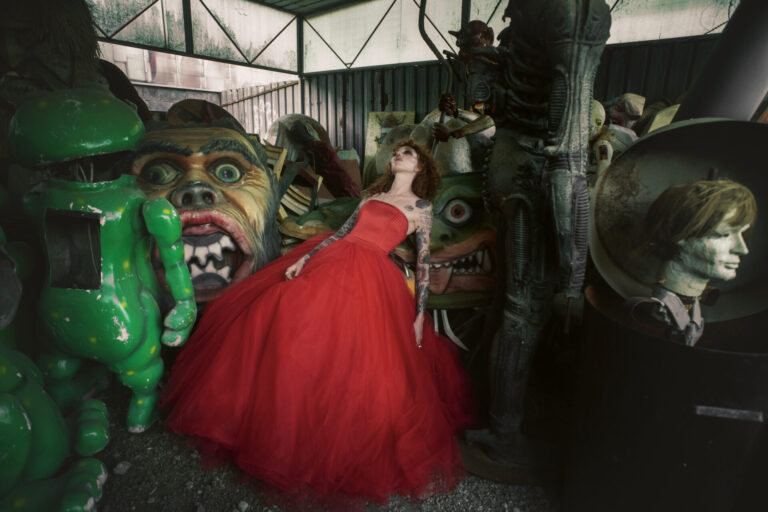 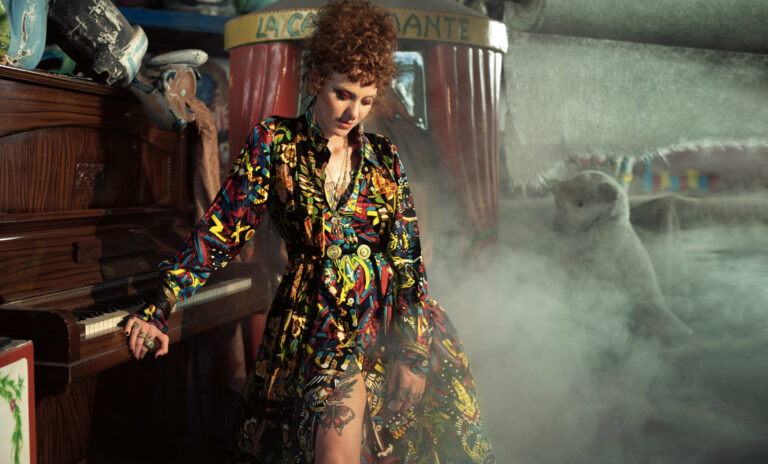 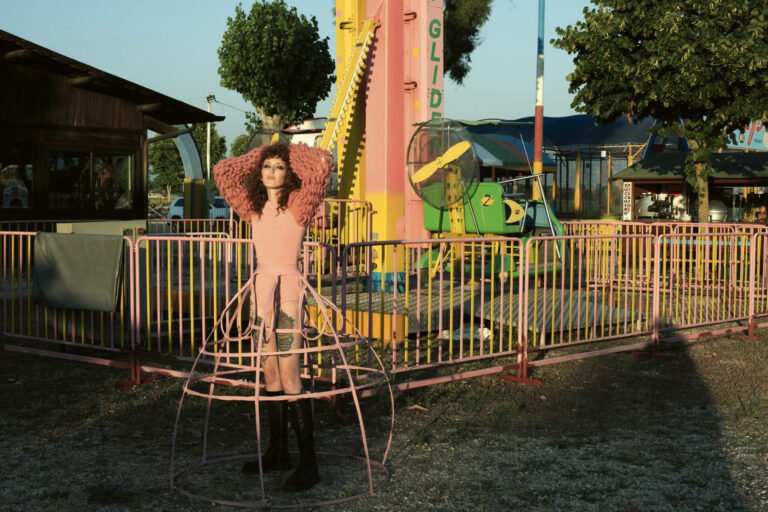 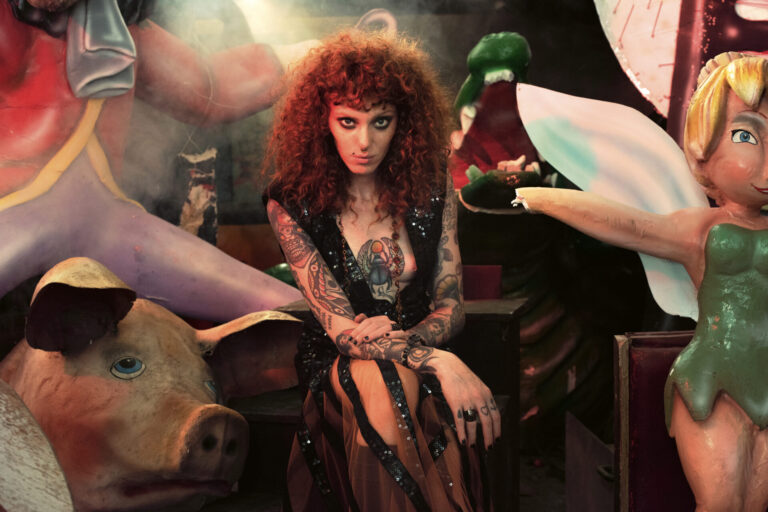 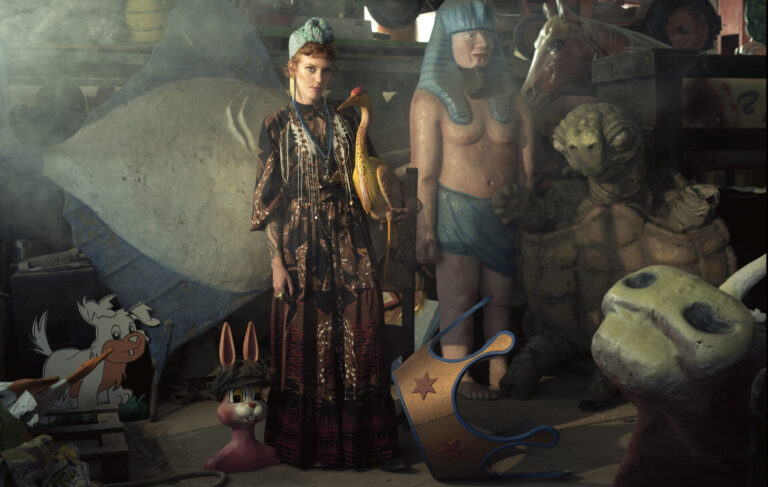 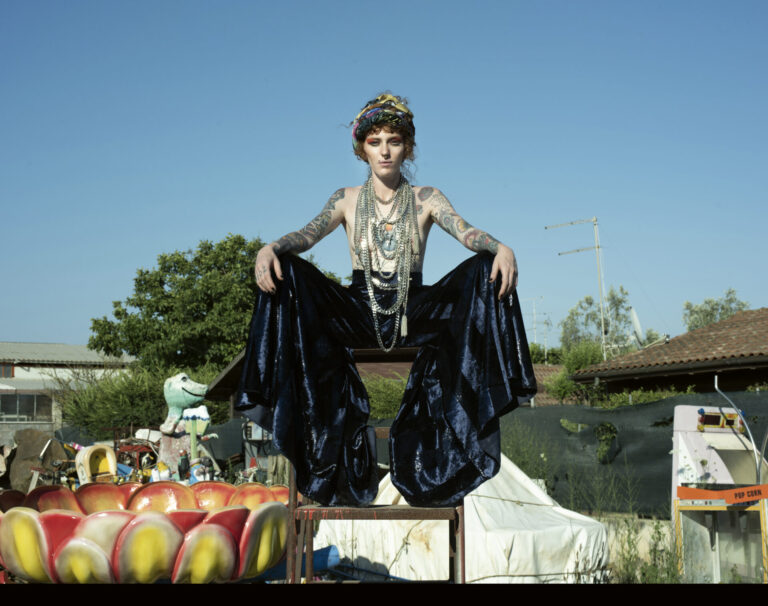 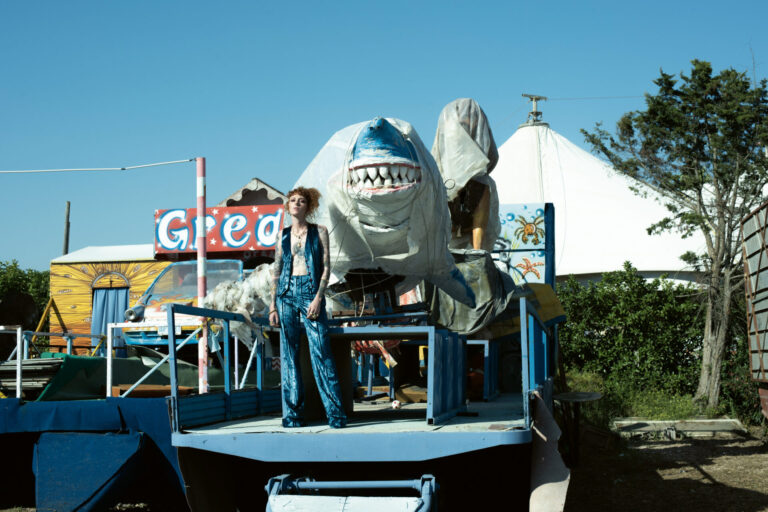 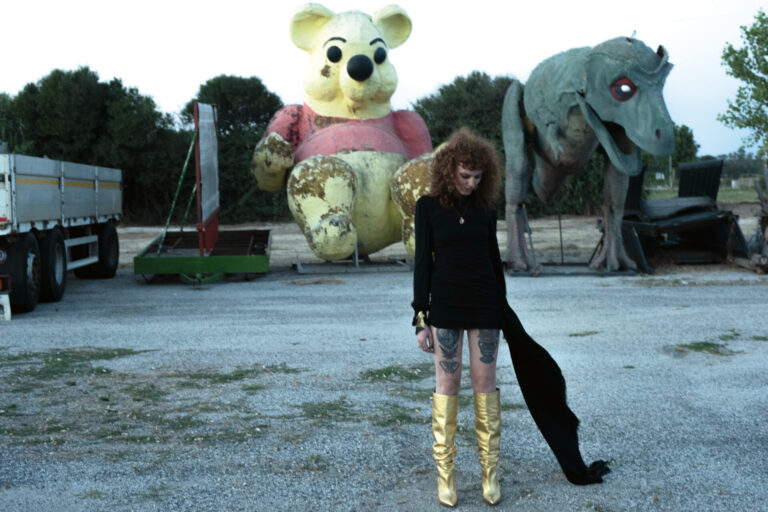 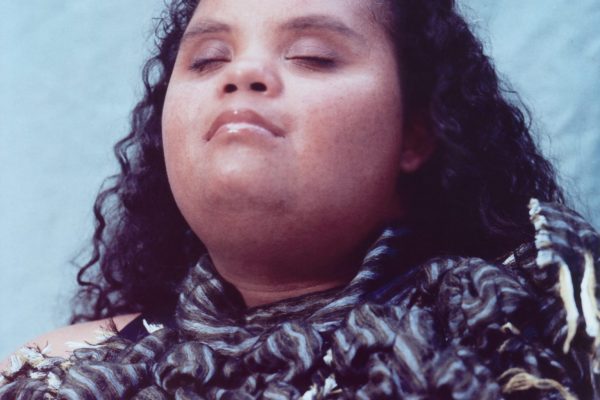 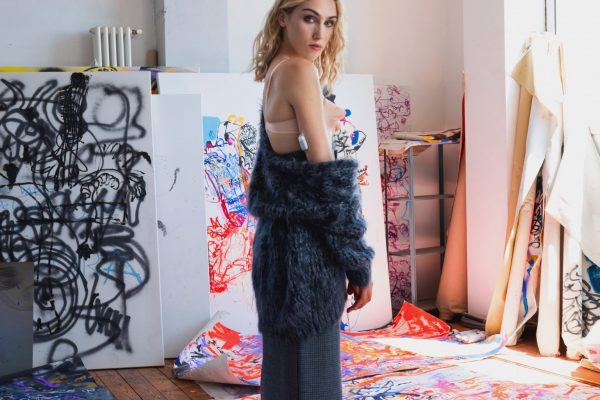